You are here: Home » News » Holiday visits on the rise according to Q1 2019 IPS data

The provisional International Passenger Survey (IPS) data for Q1 2019 has been published by the Office of National Statistics, showing a 1% year-on-year increase in overseas visits with a notable 9% rise in holiday visits. However, this growth was not reflected in overall visitor spend or the number of nights spent in the UK which were both down 5% year-on-year.

A full summary report from VisitBritain is available to download at the link below. 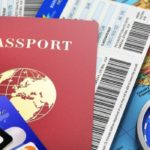