You are here: Home » News » Provisional IPS figures released for 2018

The provisional IPS data for December 2018 has been released, which also give the preliminary results for 2018 as a whole. Year-on-year growth in visit numbers and spending was seen in December 2018, however preliminary figures for the year showed a 4% decrease in visits to 37.8 million and a 7% drop in spend to £22.7 billion.

Most markets saw a fairly even decline of around 4%, however the non-EU European market declined by 12%, while North America remained static.

Although the pound continued to be low against both the dollar and euro in 2018, the fact that visit numbers and spend both fell suggests ‘good value for money’ is being outweighed by other considerations, such as Brexit uncertainties and the global economic slowdown. It is worth noting however that 2017 was a record-setting year for visits and spend, and the 2018 figures are still ahead of 2016.

The final, revised 2018 results are expected to be published in May.

The full IPS summary report by VisitBritain can be be downloaded at the link below. 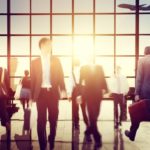