Londoners can now take a tube ride through the stars after astronomers at the Royal Observatory Greenwich teamed up with Transport for London (TfL) and the London Transport Museum to create a ‘Night Sky’ themed Tube map.

Launched to coincide with NASA’s Mars 2020 mission, each of the 11 London Underground lines on the iconic Tube map, along with the Docklands Light Railway, London Overground, London Tram, TfL Rail and Emirates Air Line have been changed to represent an astronomical subject, from constellations and galaxies to spacecraft and observatories around the world.

More than 400 stations across London have been reimagined, creating a fun visual way for people to learn more about space and night sky: 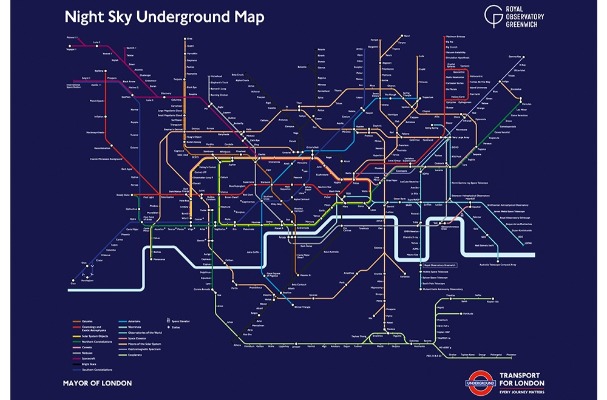 Karen Eden-Tuxford, Head of Commerce and Visitor Experience at Royal Museums Greenwich said, “Royal Museums Greenwich is delighted to partner with Transport for London and the London Transport Museum on the limited edition space themed Tube map poster. Our astronomers at the Royal Observatory have reimagined the Tube map with stars, planets, moons and spacecraft to create an iconic new map that will be the perfect gift for anyone with an interest in space.”

Julie Dixon, Head of Customer Information Design & Partnerships at Transport for London said, “London’s transport network is recognised the world over and ha been a symbol of the city for more than 150 years. We are delighted to work with the Royal Observatory on this new map, which provides a fun and engaging way of learning more about our night sky. We hope this map will soon adorn the walls of future astronomers, astronauts and space explorers.”

The maps are available to purchase shop.rmg.co.uk or www.ltmuseum.co.uk.